Bat out of hell – Oh what a night! 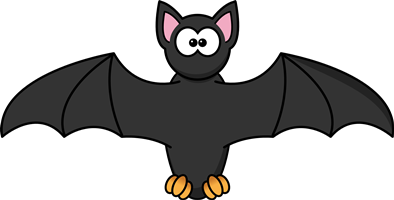 One night a few years ago, Chas was at a conference in Bangkok and I found myself alone with two young children. Ella was about 2½ and Ariya about 6 months. It was fairly late, the girls were asleep and I was enjoying a bit of a chill. There I was sat on the sofa when I felt something fall on me. I jumped up in horror as I saw these two feet sticking out on the ledge at the back of the chair.

Despite being absolutely terrified, I had to take a peek just so I knew what I was dealing with.

Imagine my absolute horror when I realized it was a bat. A giant (small) rabid (never confirmed) bat. First thing I did was ring Chas. Unfortunately being hundreds of miles away at an important work function meant he was unable to do anything other than tell me not to worry (because that calmed me down!?!) so I had no option other than to call my parents who were even further away. They could obviously do nothing, but it was ok as I now had two more people as worried as I was about this entire situation.

In a moment of desperation, I ran outside shouting for my neighbours, or anyone, to help. But instead, I came across as a mad woman. No one helped.

I called my childminder. She was good with kids…. Maybe she could be good with bats too? I called my taxi driver. He seemed like a strong man able to wrestle a giant bat out the house. Neither answered.

With no other option, we were all going to have to camp down for the night. I left Ariya in her cot, woke Ella up and took her into Ariya’s room. Put the dogs and cats into my bedroom (Rabies affects us all right!) and laid towels across both doors. (in case giant bats were in fact shapeshifters who could fit through the gaps under doors). I opened the patio doors wide to give the bat a chance to make a calm and quiet exit and waited.

I was bored, anxious, tired, terrified but needed to check whether the bat was still there and whether it had any intention of moving. So I went with my torch to catch a glimpse from one end of the sofa. As I looked, I saw it was in fact dead. It hadn’t moved an inch and its legs were stiff and stuck straight up in the air. I started to think about how it got in and whether it did in fact mysteriously fall from the ceiling. And then, with a sense of utter shame I realised what I was looking at.

There was no giant bat. No rabid monster. And no creature with wings that fell down from the heavens. This was a pterodactyl. My daughter’s plastic dinosaur. Nothing had fallen from anywhere. It had been there all night – possibly for days.

I couldn’t believe how out of control the situation was. Oops!

I updated the messages I’d sent out in panic, called Chas, called my parents, removed the towels from the doors, let the animals out, called back my childminder and taxi driver, woke Ella up again to put her back into her own bed and sat down to my very cold cup of tea.