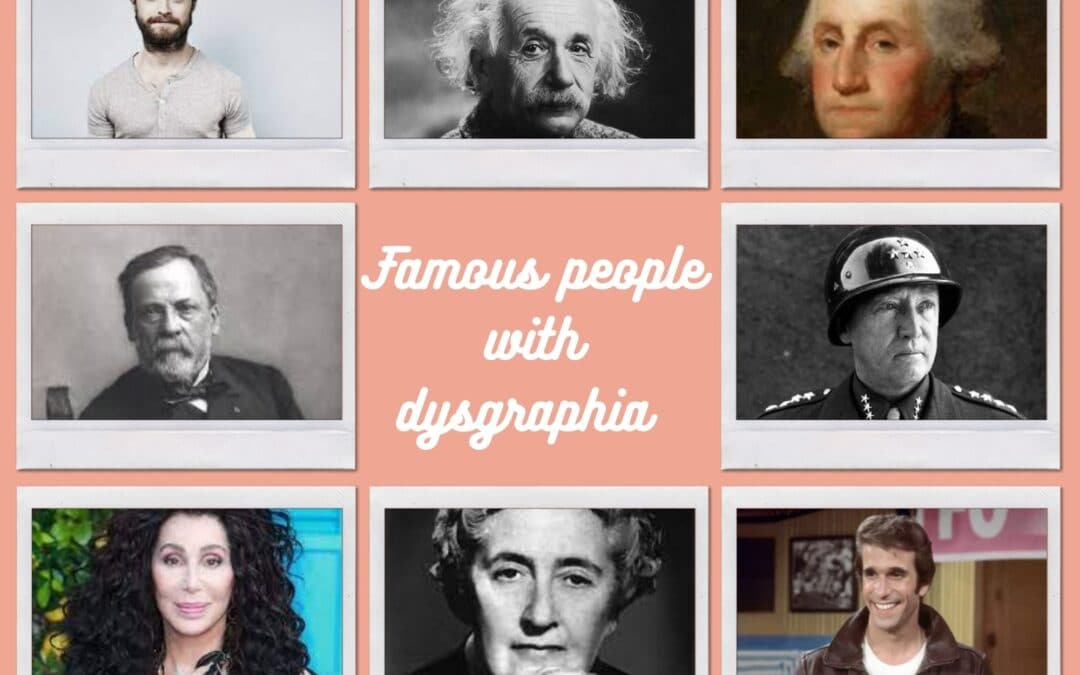 Dyslexia and dysgraphia often go hand in hand and because of this, many people won’t realise that dysgraphia is actually a separate issue. In the past, it was simply known as bad handwriting, however there is much more to this common learning difficulty than messy writing.

Dysgraphia is linked to poor fine motor skills and therefore, strengthening these skills is of great benefit.  For more information and selection of the best activities for dysgraphia, click here.

If you or your child has been diagnosed with dysgraphia and are overwhelmed with the amount of information available online, I have a dedicated dysgraphia section with a number of clear, easy-to-read and informative articles. You can find them all here.

The list below will hopefully inspire your child with dysgraphia and show them that the learning difficulty does not need to hold them back and needn’t stop them from being anything they want to be! Some of the most famous people with dysgraphia include:

This famous American General excelled as an adult, but while he was at school, he found even recognizing the simplest words difficult and writing was even more difficult for him. However, he never let this define him and he remains one of the most famous generals in American history. A WWII hero and Olympian.

The first president of the United States is said to have struggled with dyslexia and dysgraphia. Historians report that Washington didn’t spend a lot of time in school and was largely self-taught. Excerpts from his journals reveal poor handwriting, spatial awareness, spelling and grammar.

Thomas Edison, one of the most famous inventors in history, did poorly at school and was taught at home by his mother. He is said to have struggled with what is now known as dyslexia and dysgraphia. He invented more than 1,000 devices including the phonograph (record player), the lightbulb, the telephone and the motion-picture projector.

Another historic scientist, Louis Pasteur made important contributions to science and life as we know it today. He discovered how germs cause disease in food spoiling and also discovered how to make vaccines from weakened microbes. He developed the earliest vaccines against fowl cholera, anthrax, and rabies. This was all while struggling with undiagnosed dyslexia and dysgraphia.

Star of the Harry Potter movies, Daniel Radcliffe suffered from a lack of confidence as a child due to dyspraxia and dysgraphia. Handwriting continues to be a challenge to this day. However, he never let it define him and introduced to acting to boost his confidence.

One of the famous authors of her time (and still today), Agatha Christie always found writing and spelling very difficult. She struggled with dysgraphia, which was so severe that she often couldn’t read her own writing or balance her own checkbook. However, her condition never stopped her from achieving anything and she has since become one of the most celebrated authors of all time.

Better known as ‘The Fonz’, Henry Winkler had a particularly difficult time at school because of dyslexia and dysgraphia. However, his determination to overcome his difficulties led to him becoming an icon on the small screen.

Creative genius Tommy Hilfiger has struggled with reading and writing for most of his life and today is an advocate for dyslexia and very open about his struggles.  He credits these learning difficulties with his success today as he saw creativity in everything. It can be a real benefit to see the world differently.

A world famous singer and actress, Cher is another example of overcoming struggles and finding success. She dropped out of school because of undiagnosed dyslexia and dysgraphia which were finally diagnosed (along with AD/HD) when she was in her thirties.

As you will see, dysgraphia need not be the reason why any child doesn’t succeed. It is obviously an obstacle – but one that can be overcome with a bit of hard work and determination. This list of famous people with dysgraphia is testament to that.

As a parent, it is so hard to see our kids struggle. That is, in part, why I started this blog. To help other parents support their children at home and school with resources, information and advice. For more information on the symptoms of dysgraphia and how as a parent you can help, click here and for a list of the best apps for dysgraphia (online and offline) click here.

If you would like to contact me for any advice or information, you can contact me here. I’m always so happy to hear from you and will do all that I can to help!