When a pet dies – how to tell your children 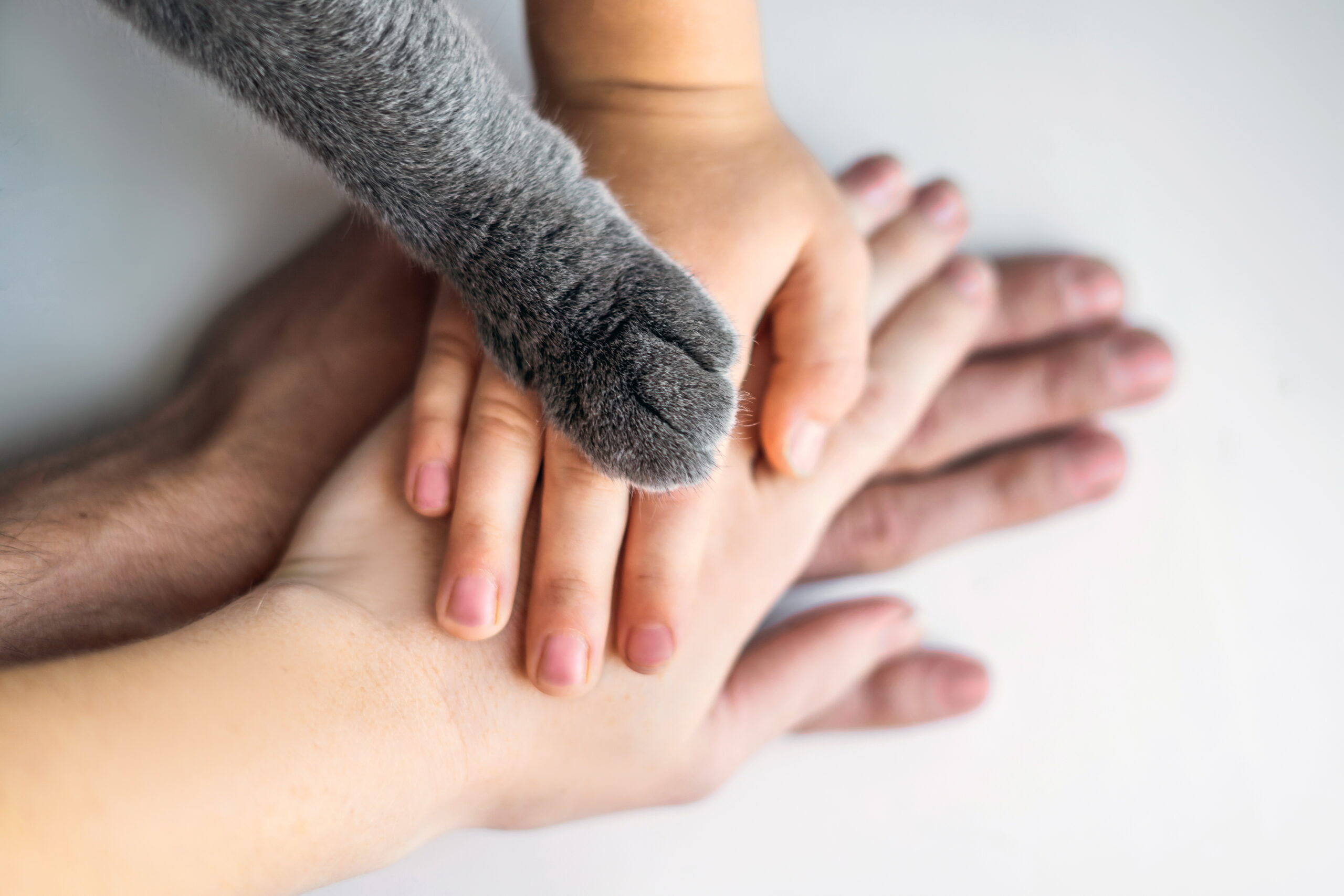 Unfortunately over the last year, I’ve become experienced in supporting my child when a pet dies. Having rescued four cats within the same year of us moving to Thailand, three of them have just passed away within a year of each other (aged14/15), and in between that, we lost a beloved kitten.

They’ve had their fair share of heartache over the last few months that’s for sure!

I was lucky. I didn’t lose my first pet until I was 21. Daisy, our first family cat, lived until the grand old age of 19. Given that I was just 3 when we got her, I couldn’t imagine life without her. I had arrived back home from my first trip to Thailand and was met at Heathrow by my mum. The previous week, my parents had tried to warn me by telling me Daisy wasn’t doing so great and maybe it would soon be time. I ignored this and heard what I wanted. So when I was told by my tearful mum that Daisy had died I was inconsolable. In arrivals. At Heathrow Airport. In fact, we were both such a wreck that people were coming up to us checking we were ok.

Responsibility as a parent

This did not bode well for being a responsible parent when a pet dies!

Fast forward 14 years and here I was in Thailand, married with three kids, two dogs and four cats. Our retriever Freddie was a beauty! Everything you would expect a retriever to be. He used to lie out in the sun to warm his aching joints (he was an old boy) and every time I left the house, I’d shout out to him to come and give me a kiss. One day he didn’t move and I just knew. I ran over to him, saw he wasn’t breathing and ran SCREAMING into the house. I forgot I had kids to think of and as you might expect, they all followed suit. Soon we had a house full of screamers.

I managed to pull myself together once I saw the carnage I’d created and began calming the children down. Ariya and Connor were just 3 years and 1 year respectively so they didn’t understand what was going on. Ella however was slightly more traumatised and I think I possibly scarred her for life at that moment. Oops!

My first attempt at being calm when a pet dies failed miserably!

Three short years later, it was time to say goodbye to my baby Cleo. (You can read about her here) I had learned from my shocking behavior with Freddie. Cleo was old, she was in pain and she clearly had a matter of hours. It was night time and she wouldn’t leave the kids’ bedroom. She loved them so much! Chas and I sat the kids down and calmly explained that it was soon to be ‘Cleo’s time to go’.  If they wanted to, now was the time to say their final goodbyes. They were terribly upset but also knew how important it was for them to say goodbye. Through tears they gave her a final cuddle and I took her into our room where she passed away overnight in my arms.

In the morning, Once again through lots of tears we buried her. I didn’t want the kids to see her (rigor mortis had set in) so I wrapped her in a towel. It’s a tricky balance. I wanted the kids to understand everything that was going on, but at the same time, I didn’t want to scare them.

After a couple of months, I decided the time was right to get a new kitten. We visited a rescue centre and chose Sushi. She was without doubt the kids’ kitten. She loved them and they loved her. We set off to the UK about 5 months after rescuing her. She was fit, healthy and happy. Unfortunately, this didn’t last. Soon into our holiday she got sick and I was told by my vet that she had FIP and would not survive.

I couldn’t believe it. One of the ways I had comforted the kids over Cleo’s death was to explain that she was old, had lived a wonderful life and it was time for her to sleep. How was I going to tell them that their 10-month-old kitten that they all adored had died?

Chas and I talked it over for a long time and decided once again to be totally honest. We sat them down and explained that she was sick, there was nothing anyone could do and sometimes life is just really unfair and when a pet dies it’s ok to be really sad. Once again there were lots of tears (mainly from Ella). The other two were still a bit young to fully understand (or care!) Connor, who was just four, was sad for all of a millisecond before bouncing off to play. Ariya, who was six, was sad for a couple of minutes before asking when we were going to get a new kitten and Ella was very sad but calmed down the minute we told them the good news.

We had decided that we wouldn’t tell the kids about Sushi until we had another kitten lined up. Our vet had found the perfect rescue. She was similar colours to Sushi, a couple of months old and very friendly. In a moment, Ella went from broken-hearted to super-excited.

Despite missing Sushi and being sad about her untimely death, we didn’t want the kids grieving. We wanted them to understand what had happened and to remember her fondly, but we wanted them to go back home excited for the new little life we were welcoming into our home.

Just six months later, it was time to say goodbye to our beautiful Brutus. He had kidney failure and I had him euthanized just after New Year 2020. This was the first time the kids had experienced euthanasia so once again we were totally open and honest. We explained that we were going to see the vet and she would put Brutus to sleep because he was in a lot of pain. We would be bringing him home to bury and it was up to them if they wanted to see him. They all said their goodbyes and remarkably they were all waiting for us when we got home. Each one of the kids took their turn to kiss his body goodbye before we buried him.

At the end of August, it was time for us to say our goodbyes to Peanut. The poor kids had said goodbye to 4 cats in 18 months. Yet they aren’t traumatised. They fully understand the circle of life and they know that each one of the cats had a wonderful long (or short in the case of Sushi) life. Once again, Peanut was euthanized and we brought him home to bury him. The kids kissed him on his way to the vets and once we’d got back home. I was sure to fully support his head and legs (as I did with Brutus) so it just looked like they were asleep. The kids knew the cats were at peace and all are buried close to each other in our garden.

We always buy a new plant when a pet dies and one of the most important things we do is look for a butterfly. When Cleo died, I told the kids she was always with us and if we ever saw a butterfly that reminded us of her, that would be her saying hello. After each of the cats has died, we’ve always found that butterfly. It’s soothing for the kids – but also heals my hurt – as it’s such a lovely thing to believe.

As with all grief, children often feel a range of emotions after the death of a pet. Sadness is the most obvious, however they might also feel loneliness, anger, frustration or guilt. They need to know they can talk to you about how they feel so you can help them work through it. All of these emotions are completely normal

However, it’s also important to remember that kids are resilient – they won’t curl up and crumble, but they will of course be sad and possibly confused. Therefore it’s so important to be honest and supportive. It’s ok to cry in front of them, my kids would have wondered why I wasn’t sad if I didn’t ball my eyes out! But soon after we buried each cat, I started to focus on happy memories.

I actually found that despite my worry, my kids dealt with their grief a lot better than I did. Kids live in the moment – they’re excited by the future and don’t dwell on the past for too long. This is really important to remember when it comes to losing a beloved pet. You might be surprised how quickly they bounce back. But if they don’t you will need to be there to support and comfort.

Points to remember when a pet dies:

Here is a useful infographic checklist to help you comfort and support your children with their grief when a pet dies. (Click to expand).

Scroll down to find a beautiful poem The Rainbow Bridge

Just this side of heaven is a place called Rainbow Bridge.

When an animal dies that has been especially close to someone here, that pet goes to Rainbow Bridge. There are meadows and hills for all of our special friends so they can run and play together. There is plenty of food, water and sunshine, and our friends are warm and comfortable.

All the animals who had been ill and old are restored to health and vigor. Those who were hurt or maimed are made whole and strong again, just as we remember them in our dreams of days and times gone by. The animals are happy and content, except for one small thing; they each miss someone very special to them, who had to be left behind.

They all run and play together, but the day comes when one suddenly stops and looks into the distance. His bright eyes are intent. His eager body quivers. Suddenly he begins to run from the group, flying over the green grass, his legs carrying him faster and faster.

You have been spotted, and when you and your special friend finally meet, you cling together in joyous reunion, never to be parted again. The happy kisses rain upon your face; your hands again caress the beloved head, and you look once more into the trusting eyes of your pet, so long gone from your life but never absent from your heart.

Then you cross Rainbow Bridge together….